Is anyone still out there? I still follow a couple poker blogs, but most the ones I really liked have sold out.

Me? I still play. Mostly live and local. I enjoy Derby Lane's $1-$3 NLHE game. Especially at night. On my most recent outing, I lost all my chips with quads over quads. I turned them, he flopped them. I flopped a set and was drawing dead. Besides that, I do fairly well.

I've also begun playing on Bovada (formerly Bodog). I cashed out $100, just to see if the money would make it to me safe and sound. It did. Took about a week, but that was to be expected. Frankly, it was harder depositing the funds, then withdrawing. Where there's a will, there's a way.

So yeah, I'm still here. Some things have changed, and some have remained the same. If you're reading this because you subscribed to my RSS feed years ago, please drop a comment and say "hi".

“Endless sea of boobs!” That was Al’s text back to me when I asked what was happening  at the field. My foot pushed a bit harder on the pedal. We were meeting at the baseball field where hours earlier the Atlanta Braves kicked the shit out of Al’s outclassed Philadelphia Phillies, handing them their third straight spring training loss. The game had been over for some time, so I was able to whip in and park right up next to the entrance. I trekked up the stairs leading into the field and could faintly here the band playing. Off in the distance was the Tiki bar where Al said I should find him. I was surprised there was so many people still hanging around drinking. I surmised that the band must be that damn good, or some drunk guy was buying drinks for the entire bar. It was the latter. Of course, you knew that.

Al had stopped replying to my texts about 20 minutes earlier and I half expected to find him slumped over the bar passed out in a pool of chunky Southern Comfort, while several of Clearwater’s finest hauled him to the drunk tank.

“Damnit!” I thought to myself. “I warned him about blowing his wad before I got here! “

Turns out my fears were unfounded. Halfway through my first walk around the bar I spotted Al at the corner of the bar with his beloved cup of Southern Comfort “Neat” (I was to later learn that  “neat” meant no ice and that my friends is very important). As I approached Al, I watched him take a big swig of SoCo and then begin furiously texting from his old and beaten  flip phone. I took a deep breath, lost the giddy school girl grin,  and approached.

He briefly looked up from his texting and slurred something to the effect of :

“I’m on a road trip, going to Key West tomorrow,  getting drunk, I got this round, whatcha drinking?”

“Danielle, Vodka Soda for this guy, it’s on me”, Al hollered.

And then went right back to his texting. Hmmmm. Moment of silence as Al continued to text, before I finally said

“Yeah you were right, sea of boobs alright”

A light bulb went off.

“OH Geez!!!”, he said “I thought you were just some guy I was buying drinks for earlier! You’re Decker? I was just texting you! Happy to meet you sir!”

After introductions were complete and another round of drinks were bought, I assaulted Al with a barrage of questions about all my favorite bloggers I read daily. I was relentless. Al happily answered each one, only interrupting me once, while he politely asked the bartender if he could get a better picture of her big fake tits. Of course she obliged (Which reminds me, he promised to send me a copy of that pic and never has!).

Finally the big question. I could wait no longer.

“ummmm Al, is Iggy , uhhhhmmmm well you know, is, is he really a little person?”

Al threw back another a gulp of SoCo and thought for a moment  before picking up his antique flip cellular device and hitting a speed-dial.

“No fucking way”, I muttered under my breath.

Al said a few words to the person he called then tossed the phone to me, as he turned back to the bar I hollered, “Al who the hell is this?”,

With his back to me and his face buried in silicone, he bellowed “Say hi to the blog father”…..

To be continued. I gotta be up before the crack of dawn and will be driving from one end of Florida to the other.

Driving on US-19 in Clearwater during rush hour is never a pleasant experience. Especially for a border line road rager like myself. The poor sods who have to commute this stretch daily, are miserable, depressed souls. They keep a bottle in their car, so they can ease their pain while sitting in gridlock for hours. The rest of us locals avoid it like the plague. Like the fat girl, with the big herpes sore on her mouth. You get the point.

On this day, however, I had a good reason to make this agonizing trek. I was gonna meet an A-list Blogger. Not just any A-lister, mind you. This is the guy that rolls into town, and exits as quickly as he came, leaving his victims prone on the bathroom floor hugging the porcelain throne, and praying for a merciful death. I've read the tales on various other blogs. The exploits have been well chronicled. So I knew what to expect. Sort of.

Wouldn't you know it? The old laptop battery is dying. To be continued. 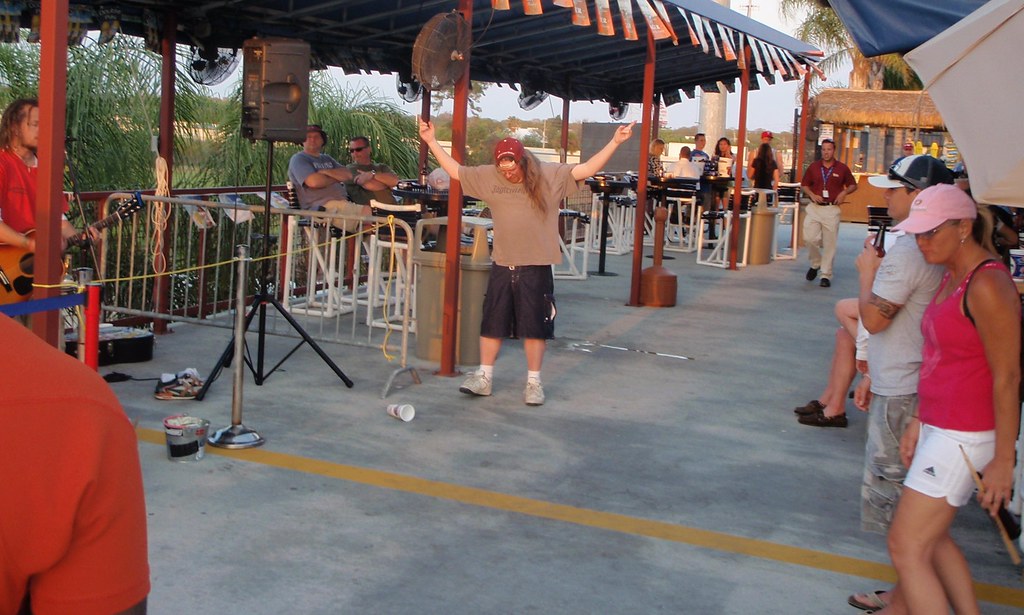 In a bit more then an hour, I’ll be meeting a true A-List Blogger for the first time. What ever should I wear? Cheers to hoping I survive the ACHE!

Had the opportunity to visit South Beach for the first time. Behold:

In their infinite wisdom, during a period of cost cutting, cutbacks, and layoffs, my company has decided to spend about $2k to send me to Miami for a seminar/convention.  I’m not complaining. Actually, I’m kind of looking forward to a break from the daily grind.

So, I’ll be staying downtown for three nights. Wednesday and Thursday night I’ll be solo. Where’s some happening places to hangout and indulge in a few cocktails?

Built a new rig a couple months ago. Top of the line Video card, MB, 4gb Skill RAM - all the bells and whistles. It's about the 5th one I've built - and the most frustrating. It will surely be the last, as the money I saved, did not pay for the aggravation I endured. I spent the better part of a week getting it up and running. My biggest mistake was salvaging my old hard drive that contained my Vista Business install. I should have known it's days were numbered. It's about 7 years old! An old E-IDE dinosaur. The new MB offers all the bells and whistles, and although I installed a 500GB Sata drive, I kept the old 75gb Seagate as my primary boot drive. Well about a month ago it started acting up. Refusing to boot and making all kinds of humming, whirring, and grinding sounds. I move crucial files and documents (IE: porn) onto the 500gb SATA and waited for the inevitable crash. Well it happened last week.

Today New Egg came through with 2 1-TB SATA drives. I got them for $79 each after rebate. Intalled them today in a RAID-1 array. It was my first try at setting up RAID, and appears to have gone flawlessly (knock on wood). My Vista "Windows Experience" index comes in at 5.5. I've downloaded a few crucial progams like Firefox, Thunderbird, various IM programs, and of course Full Tilt Poker. Now begins the task of downloading a couple dozen other apps that have built up on my desktop. Here's a snapshot of my desktop before the crash. I captured it last week, in anticipation of having to start from scratch with a fresh install:

Should be a busy weekend.
I've never been big on these resolutions things. New Year's day is just another day, and we shouldn't have to wait until this one magical date on a calendar to make changes to better ourselves. However, I have a clutter problem, and have for years, that I have yet to effectively and consistently address. My number one NY Resolution is to organize and declutter my home, starting with my office area. The pics below were taken less then 1/2 hour ago, and represent what my office has looked like for a few years. Sure, at times I've organized it, but never maintained a clean clutter-free work area. In 2009, I will do just that. I'll start right after a short poker session :) I'll keep you updated on my progress. 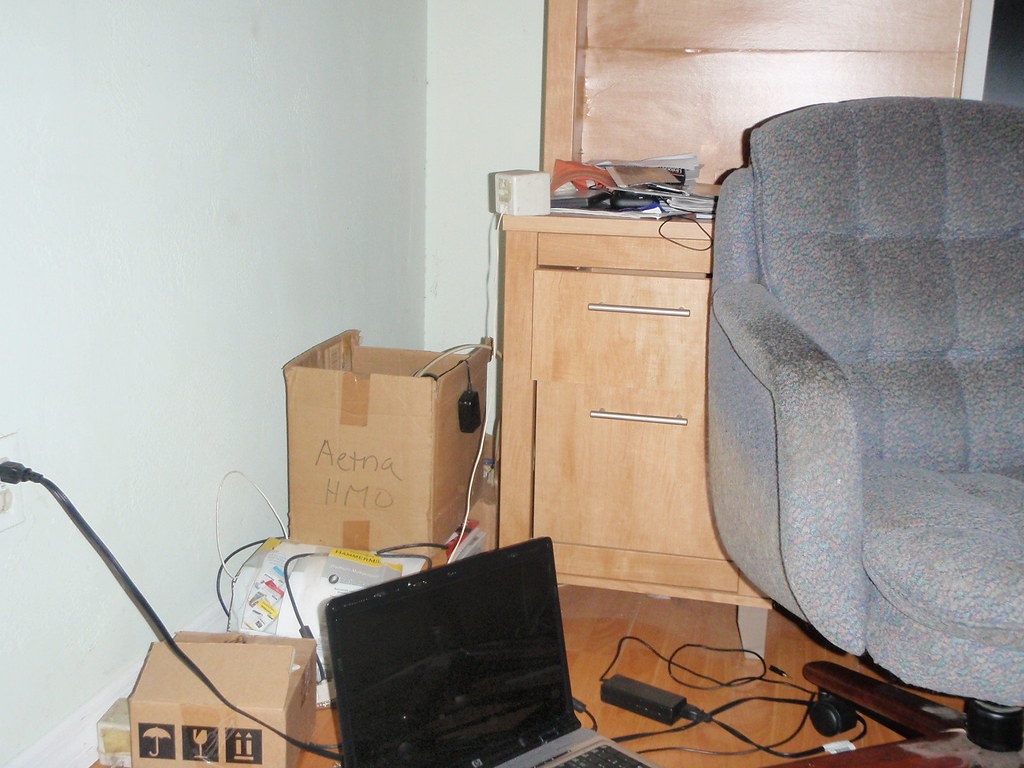 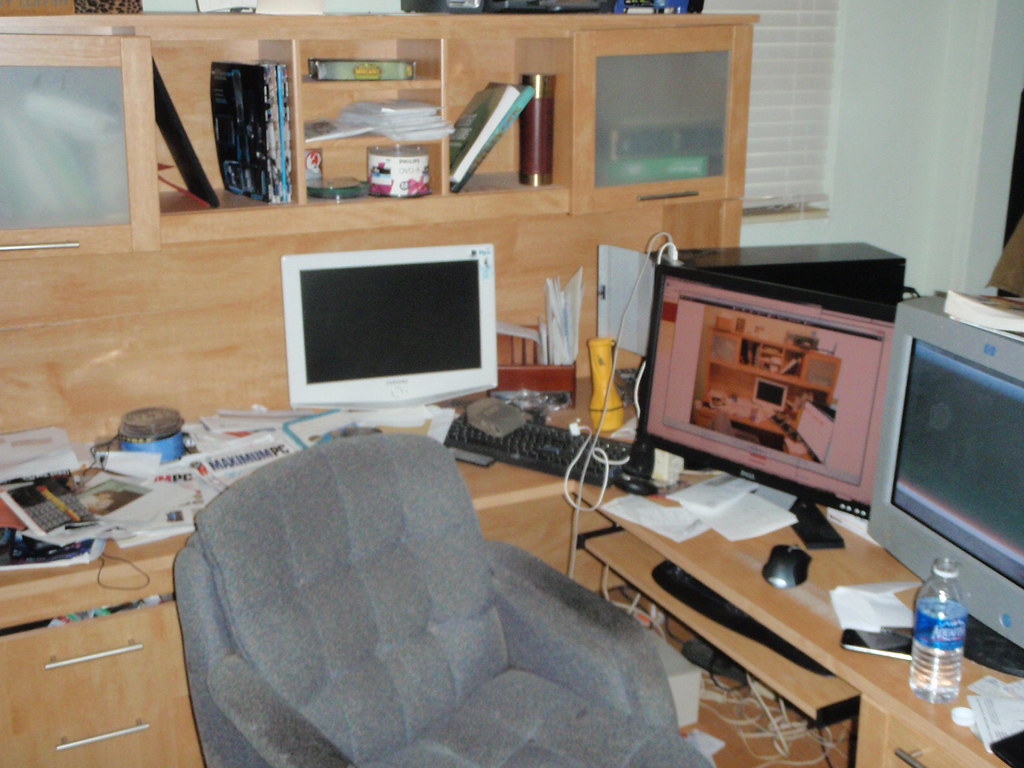 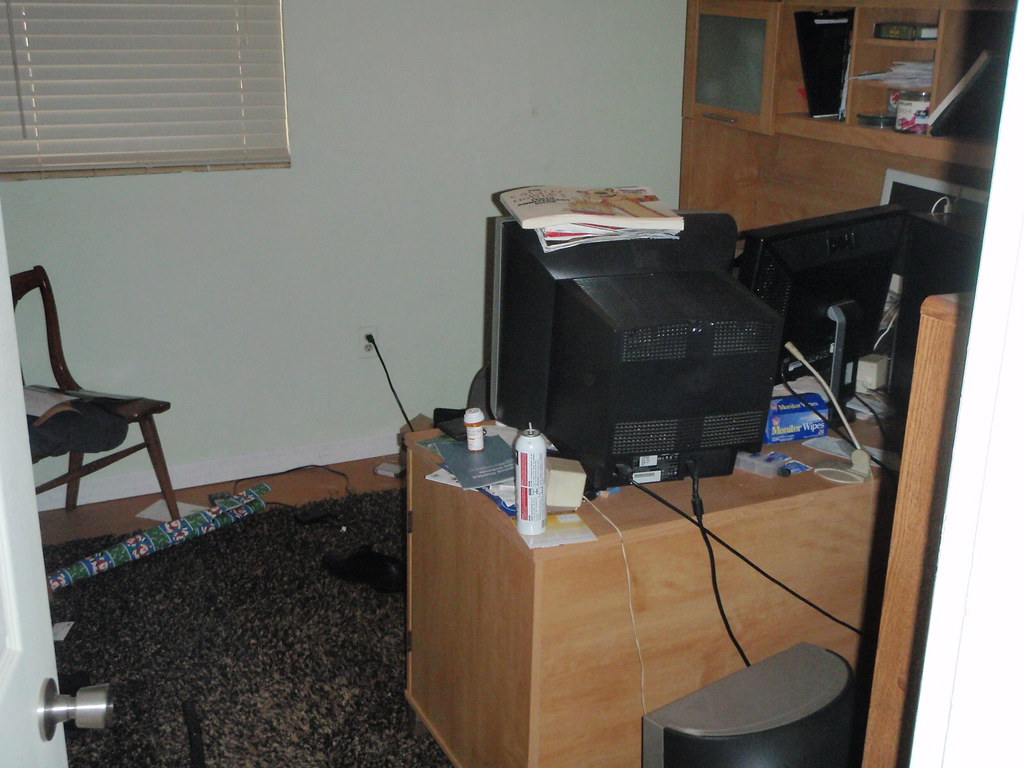 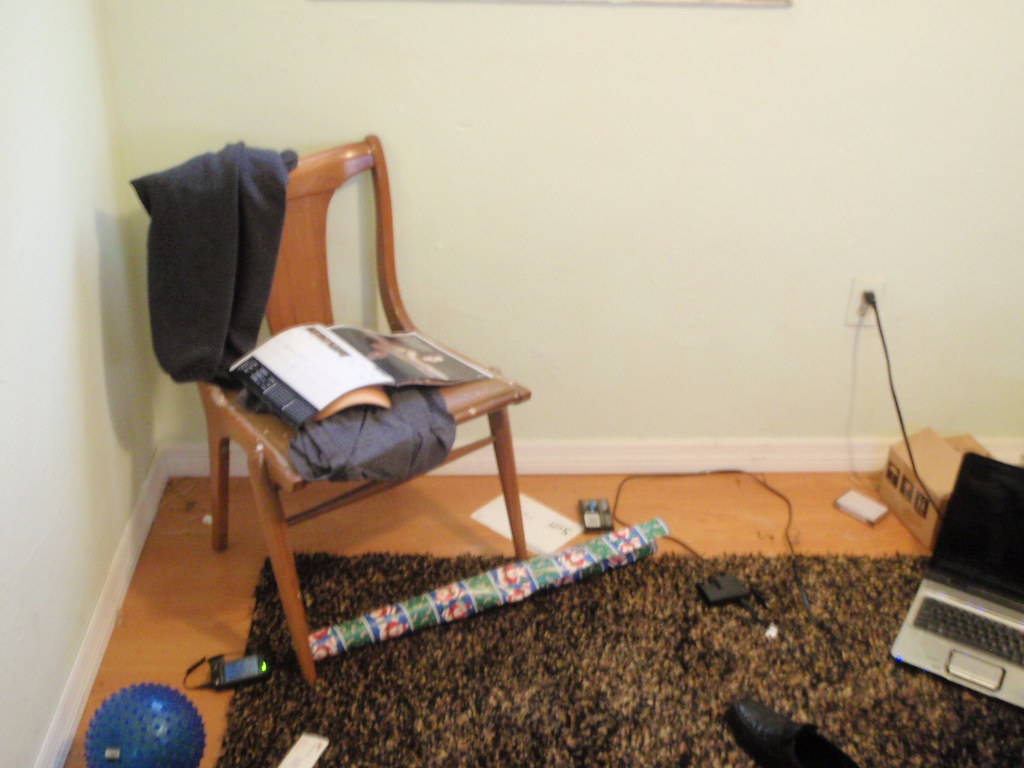 I have registered to play in the PokerStars World Blogger Championship of Online Poker!

This PokerStars tournament is a No Limit Texas Hold’em event exclusive to Bloggers.

Just got back from the Buc's game. Had two very obnoxious Viking fans two rows in front of us. They were dancing, hootin and hollering, high fiving, etc, for most of the first half. They're lucky this is Tampa and not Philly. We're civilized here. Surprisingly, they got real quiet during the fourth quarter. Wonder why? 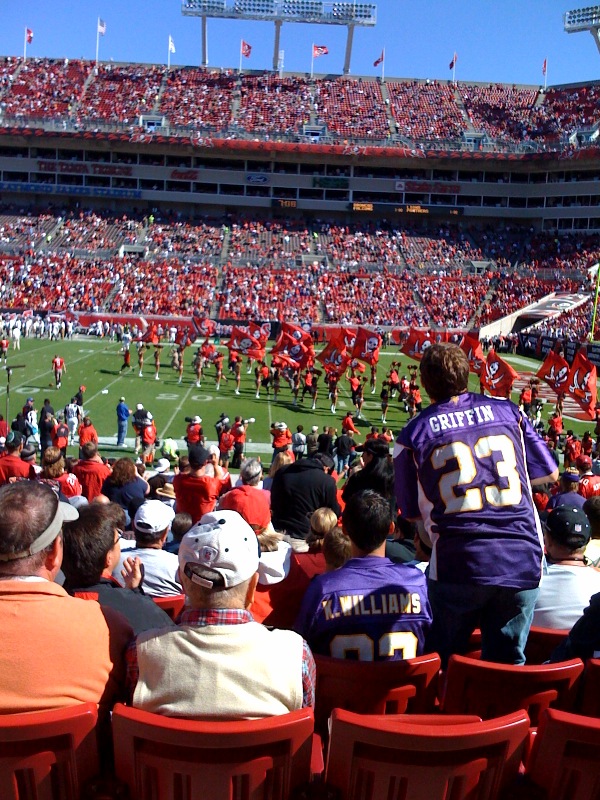